FUSE is currently immersed in a study of Ancient Egypt which began last term with a hands-on experience on our excursion to the Abbey Museum in Caboolture. There we took part in the museum’s fabulous Egypt Dig experience. Not only did the Year 7s learn in detail the hows and whys of Egyptian mummification, they also spent a few hours becoming ‘real-life’ archaeologists, digging in structured grids and carefully sifting through dirt and sand to find traces of the past. An ancient sarcophagus was surprisingly ‘discovered’ in our well-prepared dig site, along with many relics and artifacts. The excitement of the practical lesson in discovery of the past was obvious by the keen enthusiasm shown by the students as they carefully dug, brushed and sifted their way through the dirt.

(See photos for other family events the museum runs throughout the year into 2019).

Back at school we are also keeping it ‘hands-on’ as we experiment with mummifying chickens – don’t worry: they’re just from the supermarket and just chicken drumsticks this year! It makes a change from roasting them! Mind you, the smell won’t be quite as enticing as roast chicken as the students will discover as the days turn into weeks of salting chickens. 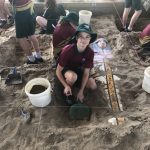