Did you know that a sea cucumber can “puff” itself up when it is feeling threatened so that it can float like a balloon out of harm’s way? That was just one of the amazing facts that Year 5 learned last Friday when Ocean Life came to visit us! We had a great day learning all about the amazing adaptations that sea creatures have that allow them to survive in their environment. Richard from Ocean Life is so knowledgeable and could answer all of our questions! He also brought along some little creatures for us to meet and touch! We saw sea stars, sea cucumbers, sea urchins and even a baby shark! Here are the highlights and interesting facts from some of our Year 5 students…

“At the sea life incursion I learnt that the large sea star spits it stomach out when it wants to eat. I also learnt that we don’t call star fish anymore because they’re not a fish so we now call them sea stars.” Rachael Little

“The best thing about the Ocean Life incursion was that we got to learn things about the sea creatures and we actually had an encounter with these amazing animals.” Emily Precians

“I learnt that the epaulette shark had false eyes on its shoulder and that it was a nocturnal feeder.” Lily Monos

“Sea stars can camouflage in the coral because all of the colours. They spit out their tummy to eat their food, once they are done eating, they stick their tummies back in. I thought that adaptation was weird, but cool.” Charlotte Robertson

“I liked the whole incursion. Richard taught me a lot of new things about sea creatures adaptations and we also got to touch sea stars, sea urchins, a live freshwater turtle and got to see an epaulette Shark.” Troy Ward

“I loved asking questions and we would get a great explanation for an answer. I learned so much! It was a great hands-on experience. My favourite animal was the epaulette shark. It was so cool how the epaulette shark can ‘walk’ on its fins, and has false eyes.” Isabella Morgan

“The sea cucumber is squishy because it is an invertebrate.” Daniel Draper

“There was a black sea cucumber and it was very squishy and when it got stressed out it would puff up. He brought sea urchins and when we put our fingers between the spikes it would start squeezing them.” Archer Palmer

“We learnt about animals adaptation and their habitat. I loved how Richard told us that sea creatures had a body shape that was made just for them so they can survive in the area habitat that they live in. The thing that I liked most was how the animals all had a unique feel to their body.” Abi Sidey 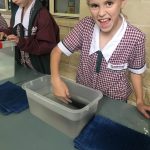