Twelve Year 3 students were excited to be selected in our Year 3 soccer team to compete in the Caboolture Schools Primary Football Competition. This competition was held at St Michaels College and there were nine schools competing in the boys division. Each team had some very skilled players and competition was tough in every game. Our boys were very competitive in every game being strong in defence and dangerous when on attack.

Our team won two games and narrowly lost two games in the pool play and qualified for the 3rd/4th place final on goal difference. We played Banksia Beach in our 3rd/4th final and boys combined really well passing the ball wide and sending our forwards on dangerous runs towards goal. Cooper Stevens put a particularly great long ball up through the middle for Micah Constant to run on to and he scored a beautiful controlled goal after being one on one with the keeper.

Luther Capps and Matthew O’Shea made many crucial saves in goal, keeping us in several games. Archie Cruise, Cooper and Lincoln Barker were solid in defence making it difficult for other teams to get shots on goal. Flynn Lewis, Teddy Morris and Zander Carlson worked hard in midfield keeping a lot of possession for our team and winning back turned over ball. Micah and Sam Wells were always dangerous on the wing making good use of the space out wide and provided great balls in to our strikers. Forwards, Eli Laugesen and Lachlan Milburn controlled the ball well resulting in several goals.

The team was very excited to finish in third place at this carnival and look forward to opportunities to play again in Year 4. It was great to have several parents supporting the team throughout the carnival. 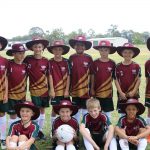