Our team of 33 swimmers were ready to take on other Glasshouse competitors at the Glasshouse District swimming carnival last week. There were some fantastic swims from our team members whether they were winning places or swimming faster than they had before and just very proud to be at the competition.

Our 12 year olds dominated the 12 year competition with Jaymes Roser winning the 12 year boys’ age champion and Indiah Loveday becoming 12 girls’ age champion. Jaymes Roser and Josh Moore once again battled it out in every race with Jaymes winning backstroke and freestyle and Josh winning butterfly even though he swam with two broken fingers! Jaymes broke the District record in 50m backstroike and 50m freestyle and Josh also broke the 50m butterfly record. These were all long standing records so are great achievements.

Indiah Loveday swam very strongly and won every race in the 12 year girls’ division showing that her hard work at training was reaping rewards. Olivia McKenzie and Nicole Morris also swam very well placing second or third in every race.

Chloe Turnbull had a fantastic carnival battling it out with Emma Small who dominated this age group last year. Chloe won the freestyle and backstroke races and Emma the breaststroke and butterfly making Chloe and Emma joint Age Champion for the 11 year girls.

Dalton Loveday and Archer Palmer also swam well gaining second or third placings in almost every race in which they swam.

After all the points were calculated GCC was runners up to St Michael’s College who are now the Glasshouse District Swimming Champions. It was a great effort from the whole team with many students gaining placings and being proud of their ribbons and others just very proud to be swimming at the carnival.

We had nine swimmers qualify for the Sunshine Coast Regional Carnival in the Glasshouse team which is almost half of the whole team! They are: Jaymes Roser, Josh Moore, Indiah Loveday, Olivia McKenzie, Nicole Morris, Chloe Turnbull, Archer Palmer, Reghan Boxsell and Dalton Loveday.

It was great to have so many parents at the carnival supporting all our swimmers and we wish our swimmers well at the Regional Carnival. 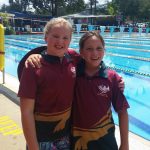 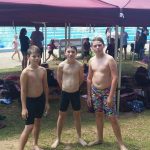 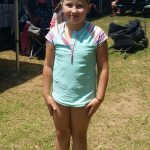 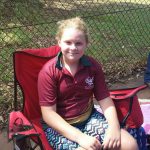