Aiden McKellar from Year 10 represented QLD in the U17 AJVC White State Team at the Australian Junior Volleyball Championships during the holidays. The annual national volleyball tournament caters to boys and girls across three age groups: U15, U17, and U19. This is the highest level of competition for junior volleyball with states battling it out to claim the coveted President’s Cup award. The U17 White State Team battled against teams from New South Wales, Victoria (Gold and White), South Australia and the U17 AJVC Silver State Team in their round robin. They played extremely well, winning 9 out of 11 games and holding first place on the leaderboard throughout the week. The QLD White and Silver team ended the week in first and second place to play against each other in the Grand Final with the QLD White team defeating the QLD Silver team 3-1 (24-26, 25-18, 25-19, 25-16) to win Gold.

QLD’s dominance at the championships resulted in many age group victories and once again they were awarded the prestigious President’s Cup award. Aiden had an amazing experience throughout the week and enjoyed staying with the QLD squad at Runaway Bay for the duration of the tournament. We are so very proud of his efforts and his achievements. He hopes to compete at this level again next year with the U17 age group and has his sights set on selection to attend the championships in Canberra next October. 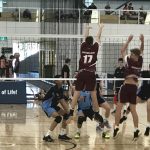 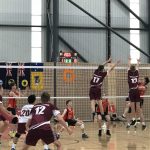