On day one, the staff were well led in the batting by Mr Osberger. Mr Osberger amassed a total of 37 runs at the crease from his barrage of 4s and 6s. Experienced cricketer Mr Pienaar was also a helpful contributor with 27. The teachers run tally finished at 127 after 12 overs with the students taking 10 wickets. This enabled them to minus 50 runs from the total score as per the agreed ruling of -5 per wicket. The students then took to the crease on day two for a run chase of 77.

On day two, the students went about the run chase in workmanlike fashion. Harry Fullerton put on an entertaining batting performance that included several 6s and 4s and fast running singles. Harry and Liam confessed after the game that they found Mr Curtis’ bowling deceptively quick and difficult to face. This was obvious during the game when the run rate slowed to a standstill during those overs. Other highlights from the innings were some delicate shots from Hamish White and a brutal 6 smashed over the fence by Stella George. Unfortunately for the students their run chase fell short by just 11 runs. You can see all the photos and action shots here: Staff vs Students Cricket Match – photo gallery. 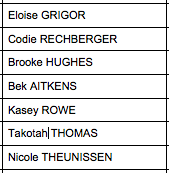 Caitlin Moore and Joshua Collins both competed at the regional competition during Week 6. Caitlin

finished 1st in the 200m and 100m Backstroke and 2nd in the 50m Backstroke. She will also now compete at state level in the Freestyle 400m and 50m. Joshua finished 1st in the 50 Breaststroke, 2nd in 100 Freestyle, 4th in 50 Freestyle and 4th in 50 Butterfly. He will compete at the state competition at all of these events except the 50m Freestyle. Chloe Dunford’s long distance event was not included at the regional competition, however, she will be competing at the 400IM at States. Congratulations to these students for their fantastic efforts.

The students in the photos below recently attended district trials. Everyone played really well and did GCC proud. Congratulations to the following players that were selected to play in the Sunshine Coast teams: Aiden McKellar, JD Theron, Patrick McKenzie. Year 7 Bos B1 vs Suncoast Mountain Biking
Holly Lubcke competed at the National XCO championships last weekend. Chasing the national title, she unfortunately suffered bike problems early in the race when her handle bars rolled forward in the clamp. This technical tragedy left her 2 min 30 sec behind the leader and in last place. From there she still managed to claw her way back to finish in 4th. She was working hard to pass everyone, except the eventual winner. Big congratulations to Holly on this remarkable effort. Triathlon State Championships
Year 9 student, Patrick Mackie competed at the recent Triathlon State Championships from last Thursday, Friday and Saturday. Patrick competed in both the individual and relay events. His best result was a 15th placing in the relay. Congratulations to Patrick for his ability to compete at such a high level in what is undoubtedly one of the most gruelling events known to man.
Matthew Beattie, Head of Sport and HPE