Wow, these children can run fast! Who would slow down to run over obstacles when you can run fast on flat ground? That was the mindset of most of our Prep to Year 2 students as they raced around the new course at the Beerwah Sports Grounds.

Lots of parents and family members came out to cheer on the students and were surprised by the thunderous and passionate war cries by each house team. The house leaders had done a great job decorating the tents and young eyes lit up as they saw their decorated tent.

The Prep girls were the first to race and little Ella McKenzie zoomed out to the lead early. She just kept on running and held the lead for the whole race and enjoyed speeding down the home straight in front of her whole house. Amaya  Roser and Corbie McNeil also ran consistently to finish second and third.

The Prep boys followed and we were amazed to see very few students go over the obstacles as the desire to win was there for everyone. Ethan Jenner and Charlie Barons ran strongly from the start and finished in that order.

The Year 1 and 2 races were even faster and the senior helpers running with the students got a very good workout. These students raced over one kilometre and their course travelled through around the oval and through the trees where it was a bit cooler on the very hot day. The winners of the Year 1 and 2 races were Avah Keeble, Willem Carlson, Eadie Townsend and Jack Ives. These races were very competitive with the winners showing how fit they were running at a fast pace but looking comfortable throughout their races. The baton relay running had certainly improved fitness levels of all our children. Souvenir place cards and iceblocks were much appreciated by students as they finished their races.

The house competition was very exciting as only a few points separated all the houses after the Primary and Secondary carnivals. The Prep to Year 2 children could change the result of the whole school cross country results! Half way through the races Zion and Sinai were tied on points with Ararat in third but in the Year 2 races the points were turned around. Ararat regained the lead as they had many more children running and getting placings than Sinai and Zion. The final points for the Prep – Year 2 were:

After the points from all our carnivals were added together, Ararat became Cross Country Champions on 550 points, Zion second on 530 and Sinai third on 520 points.

The Spirit points for the Junior Cross Country are determined by House decorations, War cries and Cheering throughout the day. It was very hard to judge this as all houses were cheering their team members on with gusto. The winners on the day were Ararat followed by Zion and in third place Sinai.

The placegetters are listed below: 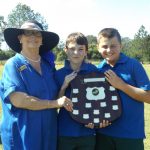