At 9:00am Thursday morning in the last week of Term 3, Mr Curtis announced to the Year 7 and 8 cohorts, what many had already observed – a geological event had occurred on the College grounds!  His announcement informed the staff and students of the occurrence which had transpired at 8:20am. A vent had formed in the playground and had caused both injury and loss of life to staff, students and parents. Thus, began the Year 7 and 8 Extreme Event for 2018!

It was a difficult situation to take in. The students had to come up with a plan to survive the volcanic eruption considering they were to remain stranded at school for up to a month with no access to communication with loved ones.

The simulation of an emergency gave the STEM and FUSE students the opportunity to explore their areas of interest, as they navigated the consequences of a volcanic event. Engineering teams fashioned all-terrain vehicles, the crisis team managed the Emergency Services aspect of the event, erecting shelters and auditing the supplies available on campus. Other groups tended to the wounded and those who needed SES assistance. Media students interviewed witnesses and bystanders and put together newsreels of the event. The Breaking News team were kept very busy with updates of ash clouds, acidic water supplies and the impending peril to SE Queensland residents. Science teams ensured others were well apprised of the changes in conditions and new crises as they arose. Students even managed the ultimate in toxic gas betrayal – lock down of the lockers. This meant that students didn’t have morning tea until after break but were placated with chocolate. They did, however, summon the strength to protest the inconvenience.

The glorious GCC vent was suitably impressive, complete with rising steam which drew crowds of students and parents alike. Students engaged with the problem-based learning experience with enthusiasm and a great sense of fun! 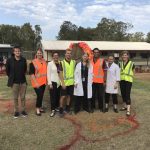